When I was twelve years old and films could still be rented in big chunky boxes, I saw John Carpenter’s Halloween (1978) for the first time. I was an eager pre-adolescent horror fan, so of course I loved it. I loved the way the whole thing seemed bathed in golden autumnal light; I loved the way the leaves danced, and crackled, and swirled; I loved the score which seemed so jangly and discordent, yet also palpating and menacing. In the same way that Ray Bradbury’s October Country can conjure up smokey, apple-scented visions of that “country where it is always turning late in the year”, so too can Dean Cundey’s magnificent cinematography call to mind a thousand memories of leaves and cheap plastic costumes rustling on cold October nights.

So of course I went to see the new Halloween movie (as it shall hence forth be known). And, yes, I have thoughts. My thoughts are certainly not cogent or profound. I watched the movie in a darkened theatre. I didn’t take notes, and I certainly haven’t found time to reflect on the film fully. However, I do have some nebulous, unformed thoughts floating around, and perhaps if I keep writing I can craft them into something meaningful. Certainly, there was something intriguing about the aesthetic of Halloween (2018). The film presents a unique visual landscape, a place similar enough to our everyday reality, but also somewhat distorted and surreal. The exercise yard at Smithsgrove Sanitarium is a wonderful example of this. It seems simultaneously mundane, a vast concrete space bordered by high brick walls, and marvelous, a giant chess board stretched out like a surrealist nightmare and dotted with tiny, inconsequential figures.

However, what intrigues me most about this new reimaging of the Halloween mythos are the recurrent motifs of reflection and repetition. Throughout the film characters catch glimpses of themselves and others that are fragmented, distorted, doubled or otherwise deformed through tricks of light and the positioning of window panes or mirrors. Significantly, those characters who witness these strange visions of distorted selfhood are generally those who played some part in the original film, and so their twisted or manipulated reflections bespeak the transformations, the estrangement, the loss of self that has taken place in the intervening forty years. Indeed, the new iteration of Halloween appears fundamentally preoccupied with the ravages of age and time, the weight of accumulated pain and sorrow. In the character of Laurie Strode, four decades after the events of that first Halloween night,we see perhaps the most pure distillation of fear and trauma. Poignantly, at a dinner to celebrate her granddaughter’s induction into the high-school honours society, Laurie observes that she too, once upon a time, was a member of the honours society. Laurie, was after all, the bright, sensible girl immersed in her studies, clutching text books to her chest protectively as she walked to and from school. Now, however, that person has been lost to time and trauma, another ghost glanced in faded reflections.

Laurie in 2018 is an intriguing study in trauma. She bears the scar on her arm where a faceless killer slashed her on Halloween night, 1978. The scar is carefully foregrounded, and the camera lingers attentively on the wound as Laurie practises firing rifles, trains herself and makes herself strong enough to bear the pain if it should come again. The centrality of the wound holds significance. It is a physical indication of the mental trauma that Laurie suffers. In her highly influential study of trauma, Unclaimed Experience: Trauma, Narrative, and History (1996), Cathy Caruth draws attention to the etymological root of the word “trauma” in the Greek term for “wound”. Trauma is the invisible wound we carry with us, the constant pain that etches itself on our bodies and winds its way into our dreams. According to Caruth, trauma does not describe “a single and healable event, but rather […] an event that is experienced too soon, too unexpectedly to be fully known and is therefore unavailable to consciousness until it imposes itself again, repeatedly, in the nightmares and repetitive actions of the survivor.” 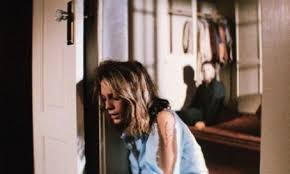 Laurie’s trauma is pervasive. It shapes her life and moulds her identity; it inscribes itself on her features and on her body. It corrupts her relationships and ultimately forces her to alienate herself as she retreats to an isolated, securely fenced-in and carefully monitored farmhouse. There, she trains with weapons, demolishing mannequins and preparing. She is reliving her violent encounter with Michael Myers through acts of elaborate preparation for what she perceives as his inevitable return. Again, repetition and reflection appear as recurrent motifs in the film. The very structure as well as the iconography of Halloween mirrors Laurie’s inescapable trauma. Caruth’s theoretical construction of trauma pivots on the notion of repetition. To her, trauma is the “repetition at the heart of catastrophe”. Those events whose horror exceeds the limits of human comprehension resist integration into our conscious minds, but they repeat themselves in other ways: they return in nightmares, flashbacks, repetitive actions. Laurie’s constant training and preparation is the repetition at the heart of her catastrophe. It is this repetitive response to trauma that slowly poisons her relationships and ultimately transmits her initial trauma through the generations to her daughter and granddaughter.

Laurie’s trauma, while not necessarily repressed, certainly does frustrate the powers of human comprehension. In witnessing the murders of her friends four decades ago Laurie experienced a terror beyond the bounds of normal, everyday experience, and, as such, it cannot be integrated into her understanding of herself as the person she once was: the honours student, the tomboy, the young girl nervously confessing her first crush. Yet, Laurie’s trauma seems somehow more profound than her own failure to comprehend her experience would suggest. Laurie’s trauma is Haddonfield’s trauma, it is the trauma of the town where the murders took place. Moreover, it is a trauma so ubiquitous and so deeply-rooted that it manifests not only in Laurie’s repetitive actions, but it embeds itself in the visual and thematic fabric of the film itself. Throughout Halloween (2018) numerous incidents recall events or iconic scenes from the original: Michael dresses a victim in a facsimile of the ghost costume he wore in the original film, Laurie searches the closet for Michael, Laurie falls through a window and disappears just as Michael goes to look for her presumably broken body. These strange, distorted repetitions are fundamentally uncanny, and they clearly evoke Sigmund Freud’s admonition that those things which we seek to repress, the dark things buried within us, will invariably return to confront us in ever more horrifying forms.

The return of the repressed has, of course, always been a central organising motif of the Halloween franchise. The first film in the series is predicated on the collective trauma visited on the small town of Haddonfield, Illinois, after a young boy murders his older sister without motive or explanation. The majority of the film’s action takes place fifteen years later, on Halloween 1978, the night he came home. While the idyllic American town may attempt to bury the knowledge of the initial murder, it nevertheless returns as the veil separating the living from the dead is rendered porous on All Hallows Eve. Yet, Halloween (2018) is not merely interested in the return of past traumas, it also highlights the necessity of confronting and moving beyond one’s traumatic wounds. As Laurie sequesters herself in her isolated homestead, accumulating weapons and cutting herself off from the world with barbed-wire fences, a number of other characters refer to Laurie’s fortress as her cage. She is fenced in by her trauma and trapped by the stasis of her own paranoia. In the film’s closing moments, Laurie traps Michael in the basement with the help of her daughter and granddaughter. However, trapping Michael is not Laurie’s aim; instead, she sets fire to the basement and burns her home/fortress to the ground. As she does so, she informs Michael that the basement is not a cage, but a trap. Perhaps this, then, is the film’s thesis statement on trauma and its insidious, destructive power: it is not a cage but a trap. While we think trauma might serve only to alienate us, perhaps even protect us, in a cage woven from the horror of past memories, it is in fact a trap that will destroy us and consume us slowly overtime. 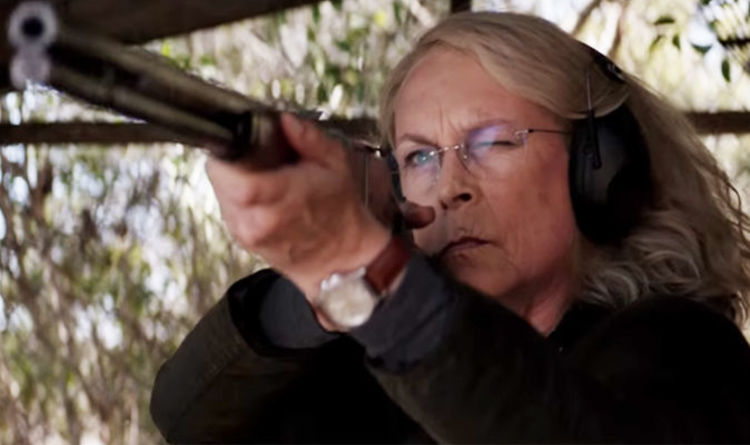 View all posts by Miranda Corcoran

This is a text widget, which allows you to add text or HTML to your sidebar. You can use them to display text, links, images, HTML, or a combination of these. Edit them in the Widget section of the Customizer.
%d bloggers like this: